What Is A Bengal Stripe?

In Off the Cuff
by Emma Hahs

A brief background on the most versatile stripe

The Bengal Stripe is perhaps the most popular of all shirting stripes. This is thanks to its versatility and ability to straddle both informal and formal attire with equal alacrity. A Bengal stripe shirt looks great worn alone, without a tie and unlike some other striped shirts, it does not feel that something is remiss when the tie is omitted; the balance and confidence of the design means that is just works. Worn with a tie, Bengals are surprisingly uncomplicated, sitting elegantly under a suit, and working in with bold madder, spots, fancies or textures perfectly well.

Bengal stripes became popular in the 1800s, but reference was paid to them in East India as early as 1680. Their roots, as the name would suggest, stem from Bengal. The stripe was worn by the Bengal Lancers, a regiment of the British Indian Army. The cloth was also found in the country’s markets, making it onto ships as they carried their wares to European shores.

Unlike other stripes, the evergreen appeal of the Bengal stripe has remained true. After the flirtation of bold and statement stripes in the first years of this new millennium, the popularity of stripes waned. This was largely as a result of the negative connotations of bold and brash banking excess that were associated with them, and it is only now that they are slowly clawing their way back into wardrobes. 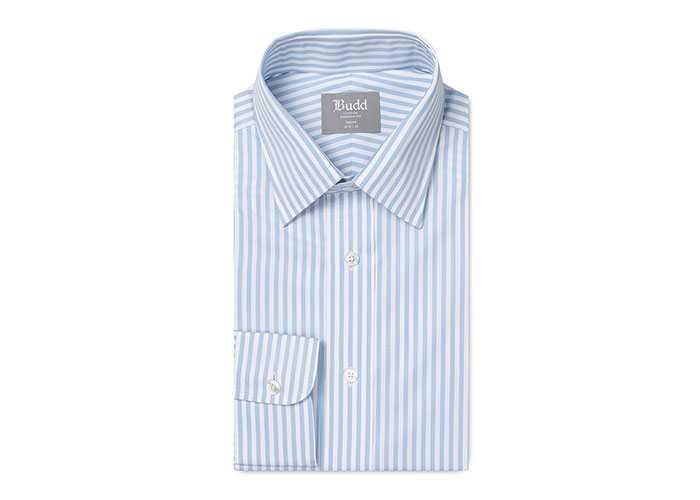 So what are the parameters that make a Bengal stripe?

Stripes are evenly spaced and a uniform width of ¼” (inch). A Bengal stripe is usually limited to two colours only, one of those being white. The most common stripe colours tend to be sky blue, navy, pink or lilac. The subtle and balanced appearance of the stripes is flattering and elegant and serves as a great alternative to a solid shirt ground. This is one of the few designs that looks good with bold patterns, without being too busy on the eye or complicated. Somehow, laid with other patterns, it just works.

Autumn 2019 sees Budd make life even easier when it comes to getting dressed in the morning, with the addition of Easycare Bengal stripes to our tailored shirts collection.