The Evolution of Black Tie

Black Tie is widely seen as a particularly elegant code of dress; so it is difficult to imagine that it began life as an outfit suited only as a semi-formal alternative for more informal events, away from the company of ladies. It is unclear as to when gentlemen began to don the shorter evening jacket, though it likely evolved as a few rakish chaps decided to be a little risqué and to imitate the Eton jacket and/or, given the weight of military rank and station as Britain's empire burgeoned, mess dress. It might be good to conclude that the styles which came through would probably have combined the sleek lines of a schoolboy's jacket (for the younger, dandyish chap) with the masculine, empowering tailoring of an officer's attire. Certainly, the very decent gentle-people at Henry Poole hold a strong claim to have sired the dinner jacket (or tuxedo for readers outside of the UK).

In the mid-1860's, the future King Edward VII ordered a short evening jacket for dinner parties at Sandringham; this being the first notable record of any such outfit - and the notion of Royal approval of the dress code gave rise to numerous orders for such garments; including the forefathers of the Tuxedo Club in New York. King Edward's famed visit to Tuxedo Park and his legendary ensuing romantic shenanigans gave rise to further publicity for the style and to the hackneyed Tux or Tuxedo moniker.

As with White Tie, this more casual evening dress would originally have been worn by only a small proportion of the population; it is interesting to note that there is, in fact, a correlation between the gradual devolution of the class system in Great Britain and the ascent of Black Tie. Britain's bickering with her neighbours had enduring consequences for the ruling elite as the lower classes demanded (and received) better conditions and an increasingly equal society. Whereas Mr. Budd started off with exclusive bespoken garments - with all things surely made to measure for the gentrified elite - many evening functions lost or played with formality after the Great War. 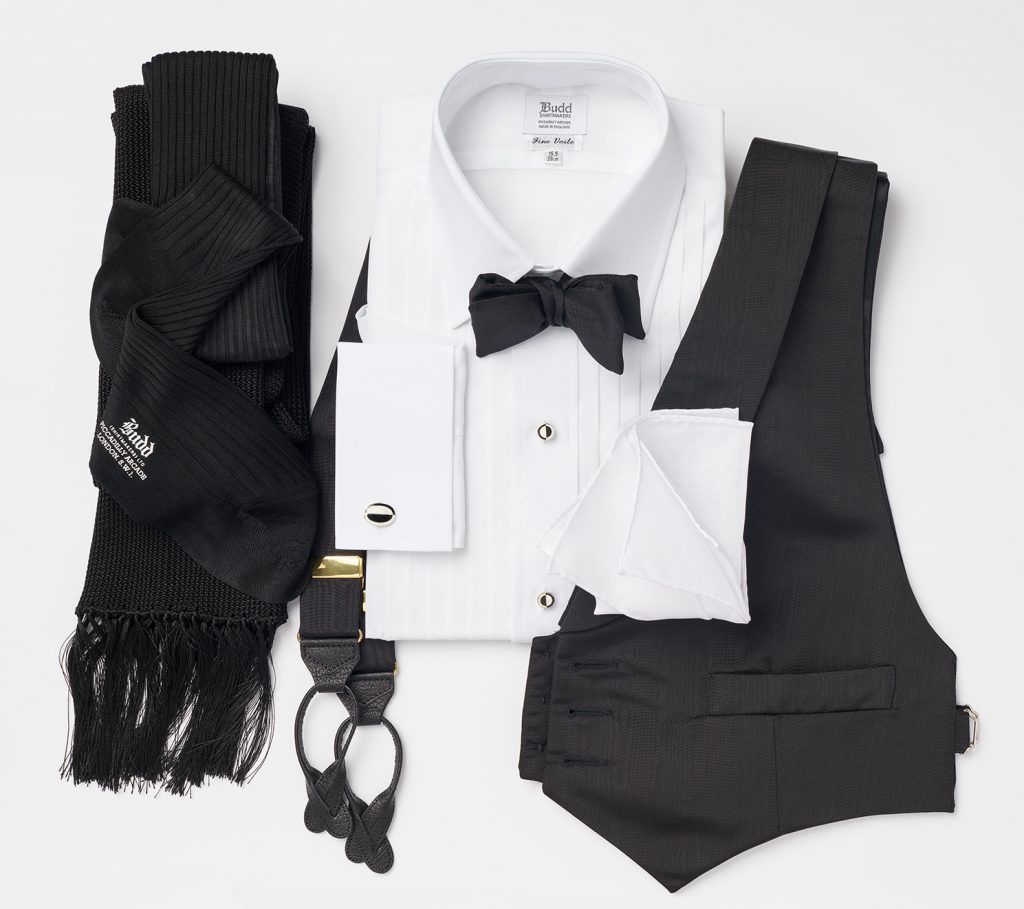 The jazz-movement-inspired Charleston bow tie that still sits in the shop would have been an early 1920's gambol as the stiff formality of many engagements began to relax and shorter jackets became more accepted as the norm. By 1927-28, it is probably fair to say that White Tie was restricted to only the highest of formal affairs - very much like it is, today, and - of course - remained the staple attire of the City's liverymen. Ironically, many of the features of White Tie such as the starched linen, or latterly, a stiffened Marcella or semi-stiff shirt would have been prominent (as per antiquated regimental mess kit); although there were revisions, for instance selecting a black bow tie which complimented the facing of the lapels. A black waistcoat would also have been expected to accompany the outfit; the notion of black tie without a waist covering is a sartorial faux pas.

It must not be forgotten that the whole smoke and mirrors stylistic charade that is to enhance the manliness and attractiveness of the wearer; in a demure and inoffensive way. As such, the dinner jacket builds upon the etiquette of White Tie - so the black dress vest (as some would say it ought to be termed) would be essential to build the appearance of an elongated form and slimmer waistline.  The lapels, always broaden around the chest to allow a white pocket square or flower to work together to add breadth to the gentleman's upper body. This deliberate undertaking helps to enhance the stylish allure associated with evening dress. Naturally, to ape the style of White Tie, studs would have been the accepted form of fastening, or, at the very least, a fly-fronted shirt (by a particularly rakish gentleman); buttons would not have worked with a starched shirt - so it would have seemed very out of place. 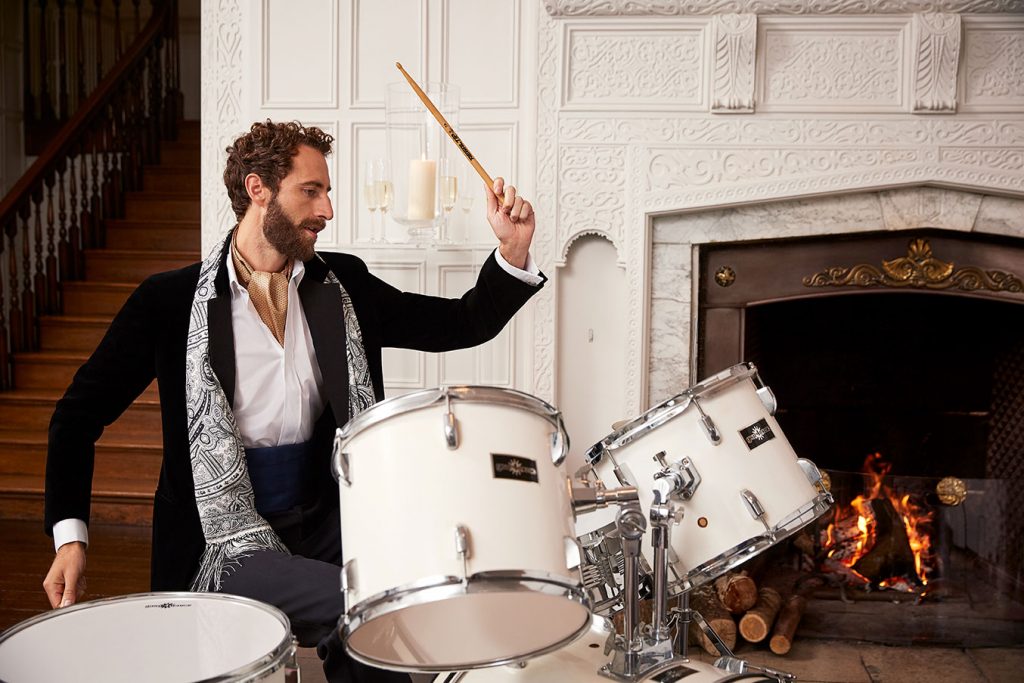 Evolution beckoned (beckons) still further for Black Tie and the greater use of the civilian version of a cummerbund - an elegant, finned silk band that runs around a gentleman's waist (to neaten the transition between trousers and shirt). Historically associated with the military - but in regimental colours with no necessity of the fins (which served as tidy pockets for opera tickets and such), the elegant band of silk affords a neatening of the shirt and less layering to the upper torso. In spite of criticism to the contrary, the cummerbund is particularly flattering to the youthful wearer, highlighting a gentleman's figure when seeking to enchant potential admirers.

Additionally, the softer turn-down collars (which are most popular today) gradually became an acceptable alternative and quite visible departure from the impeccable rigidity of White Tie. Indeed, it is arguable that the most elegant of Black Tie shirts, now, is the hand-pleated silk shirt: with a soft, attached collar and exquisite, vertical folds of silk offering a very comfortable and aesthetically pleasing alternative to the classic, Marcella (golf ball style) shirt in optic white. 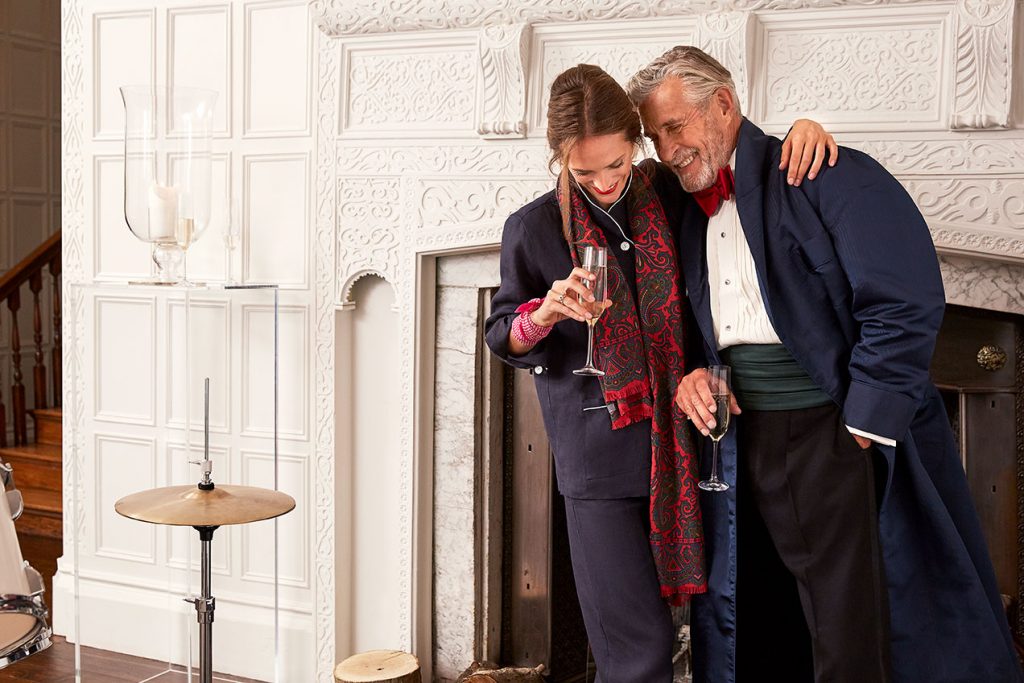 As per days of old when officers used to walk into Budd to ask our Head Cutter to proffer zany mixtures of cloth to line their sleeves and back pieces; we now sell ready-to-wear Fancy Back shirts. This is both a nod to the days when officers would attempt to outdo each other with the most astonishing of oddments pieced together to create ever more daring garments and to a newer audience whom have embraced the tradition and made it their own. After the most senior of all had paid his relevant respects and proposed the necessary toasts, his jacket's removal would signal to any budding peacocks that they might reveal their 'masterpiece's' to those present. Fans would seldom be expected to adopt such ceremony, now; yet the effect is no less stunning. If more subtle modes of self expression are required, perhaps a flare of colour via a bow or cummerbund in red moiré or blue corded silk might capture the imagination a tad more conservatively!