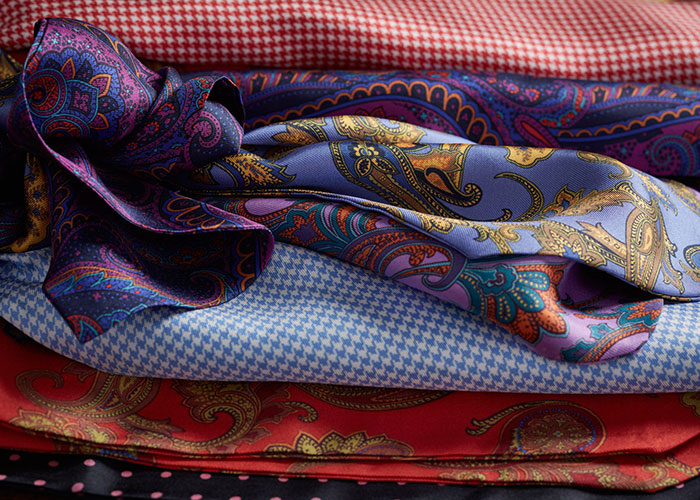 Cravats used to be thought of as something worn by elder gentlemen and a sign of times gone by, however, our Piccadilly shop and website has noticed an upturn in their popularity over the last year. Perhaps this is due to the softness they can lend to a neckline and the compromise they provide when choosing to eschew a tie. They allow the wearer to maintain a considered, smart-casual appearance. A silk cravat is also deceptively warm, handy for when on the go.

When discussing cravats, we are generally referring to a small neck scarf worn tucked inside a shirt. The etymology of the word Cravat reaches back to the mid 17th century, deriving from the French word Cravate or Krabate in German. The words literally translate as Croation or Croat. This was in reference to linen scarves worn by Croation soldiers that came into fashion in the 1650s after they had fought with the French during the Thirty Year War. 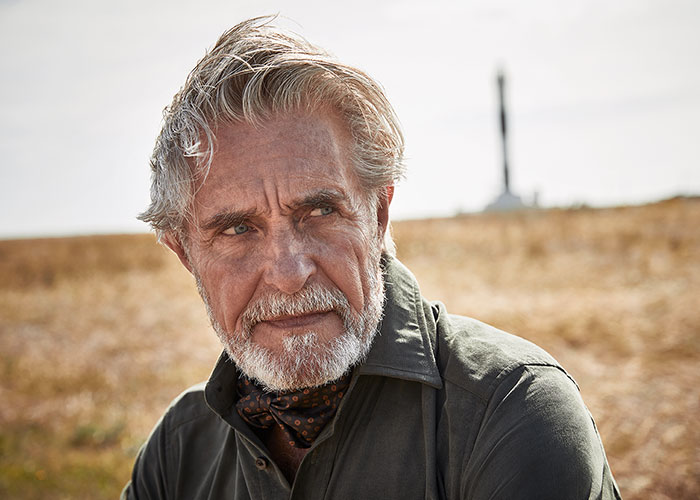 The civilian version of the scarf was traditionally a triangular piece of lace, or linen, edged with lace. Over the following two centuries, the scarf evolved into a necktie that would be worn around the neck and tied in bow or, in the case of stock, tied twice around the neck. This bow over time evolved into the classic necktie that we know today, however, the cravat continued to exist, its origins still firmly rooted with the Croat troops and their scarves.

When referring to classic, modern day cravats (as worn tucked into a shirt), the term Ascot also crops up and is sometimes used interchangeably. This often causes a little confusion amongst gentlemen, thanks to a difference in the interpretation of the words each side of the Atlantic. Across the pond in the States, an Ascot and a Cravat are ostensibly recognised as the same thing, whilst on British shores, the two are quite different, although closely related.

Andrew Rowley, Budd’s shop manager, has been with the company for over three decades and is considered one of London’s foremost experts on matters of dress code and correct turnout. Who better to defer to than him for an explanation of these two items of neckwear and how they differ:

“Silk cravats are casual and are made of patterned foulard silk. They usually have three pleats at the back and are to be worn inside an open neck shirt to provide colour and warmth.

Within our Jermyn Street parlance, Ascots are for formal wear and are made of woven silk, traditionally in a salt and pepper design (black and silver). They are worn with a wing collar and a morning suit and gained their name from the Ascot races where attendees wore the neckpiece as part of the dress code. The back of a traditional Ascot is only 3/4" wide, in order that it does not protrude above the wing collar. It is tied so that you can wear a pearl pin or something grander with it. This serves not just an aesthetic purpose, but a practical one, holding the blades in place.

Back in the day, our Managing Director Mr Chalmers, used to boast that he tied an Ascot for George V!”

Today Ascots may be found at weddings, where they are often matched to a waistcoat and worn by groomsmen and ushers. They are seldom seen at Royal Ascot. They are always in silk, and whilst continuing to be available in silver and black, are often found in solid or self-patterned designs. They tend to be stocked by dress wear outfitters, as opposed to traditional haberdasheries. By contrast, cravats are never one solid colour or striped, but instead are normally patterned in a madder, geometric or paisley design and are today worn in a more casual, and relaxed way than ever before

Take a look at our cravat collection. A broader collection is also available in store.