Budd’s very own cutter, James Macauslan is getting married this month, and the team at Budd feel like proud parents. James joined the company back in 2011, when he was just a young whipper-snapper. After a brief stint of work experience, he was invited to become the company’s first bespoke shirtmaking apprentice in over four decades. Back then, James had been with his chap for a couple of years and it all seemed very sweet. Fast forward eight years to 2019, and James and his partner, Nick are ready to tie the knot! 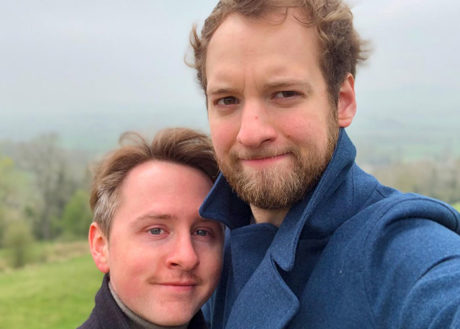 James’s proposal was dreamily romantic. He planned a surprise evening picnic, replete with a Fortnum & Mason’s hamper on the banks of the River Thames. The day itself marked the ninth anniversary of their first meeting. Having curated the scene and ready to pop the big question, James was the one in for the evening’s big surprise, when Nick nipped him in the bud, and asked him for his hand in marriage first. Fast forward one year exactly, and Thursday 4 July, will see Nick and James do the deed, a decade to the day from that first encounter. 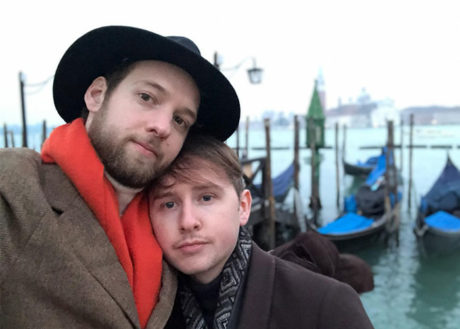 With the big day almost upon us, we cannot wait. We have new shirts, ties and hats at the ready! Needless to say, with such meticulous eyes for style and detail (James as a cutter and avid menswear fan, and Nick as an interior designer), the couple have given long-consideration to their outfits du jour (make that jours) and we cannot wait to see the end results. Naturally, we will capture the wedding party and our grooms in all their glory, but could not resist providing a preview of what is in the pipeline. However, photos of the finished suits are to be withheld for now, thanks to James’s strict embargo.

James has opted for a brown, birdseye two piece, single-breasted suit. This is not any brown suit, it is quite simply, THE suit (of destiny). On their anniversary trip to Venice last Autumn (they do like to mark an occasion), James stepped off the Vaporetto upon arriving in the city, only to find himself slap-bang in front of a cloth shop. As a shirt cutter and tailor, the opportunity to go in could not be passed up. There is something almost fantastical about a cloth haberdashery in the heart of Venice and the shop did not disappoint. Familiar with bunches from so many of the Italian and British cloth mills, James had long hankered after a particular brown birdseye cloth and here it was, sitting as a cut length, all on its own, just the right length for a suit! Not something to pass up, James immediately purchased it and given its sentimental value and the serendipity of the moment, earmarked the cloth as the basis of his wedding outfit. 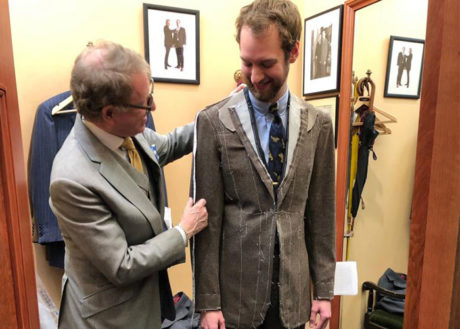 The community of Savile Row and St James is a tight one and craftsmen stick together, a useful factor when it came to getting the ball rolling on having the suit made. As an enthusiastic cutter, James had a clear vision of how this two piece number should look. He set about cutting his pattern, but progressed the suit under the watchful eye and generous time of Patrick Murphy, Head Cutter at Davies & Son. Patrick has long championed James, so helping him to cut his suit and have it made up, was a privilege. It was also fun to work with a different cloth, one with which Pat himself was unfamiliar.

Nick was not to be left out in the cold, and has also benefited from the kindest of wedding gifts. Close friend, and Senior Cutter at Gieves and Hawkes, Nina Pendlington has cut his suit, dedicating her off-duty hours to ensure he too is perfectly turned out. As wedding presents go, the gift of a bespoke suit from Nina really is top of the charts. 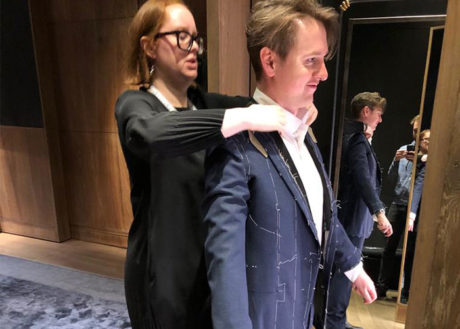 Given James’s penchant for experimentation, the styling on his suit has been kept sharp and classic. Nick too, has a simple suit and one that provides endless versatility thanks to its gorgeous blue, almost indigo denim hue, courtesy of Harrisons.  This will be worn with a classic, Soyella shirt, cut by James...of course.

Once he had established his colour and cut, James’s vision for his overall look really took shape, leaving him with a very clear idea as to the colour and cloth for his shirt, namely an ivory cotton silk blend cloth from Alumo's Saroseta range. This class shirt features a signature collar created by Senior Cutter, Darren Tiernan. It will be paired with a burgundy piccola tie and a linen pocket square, tea-stained and hand printed by James himself during a workshop with block printing company,  Yateley Papers (he really has left no stone unturned). Nick too let his creative juices flow and will also be sporting his own, hand block printed square on the day.

James is a fan of good clothing and as the nuptial celebrations are spread over two days, he has also designed a second look. Day one, and the actual wedding day will be marked by an intimate occasion with family and friends at London’s iconic Chelsea Town Hall; Day two, a larger celebration will be hosted at Holland Park’s wonderfully romantic, Orangery.

Whilst we are unable to divulge the details of Nick’s attire for the second day, we can divulge that James will be sporting an unusual and handsome green, double breasted linen suit with high waisted trousers, cut by celebrated cutter, Kathryn Sargent, using cloths from British mill, Harrisons. The line and design of the suit carries overtones of a classic dinner suit, a formality perfectly suited to an evening soiree. The shirt draws inspiration from Eddie Redmayne in the Danish Girl, and is again cut from ivory Saroseta. The perfect shoes could not be overlooked and have been carefully sourced from Baudoin and Lange in order to ensure that they are the perfect match to the suit. 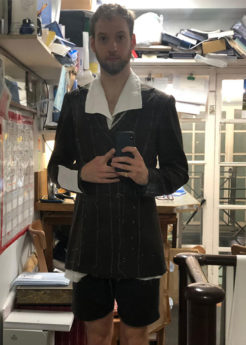 We are so excited as we count down the days and know that we will be in for a few surprises as the events unfold. The devil is in the detail and by now it will be apparent that Nick and James have an unswerving eye for even the smallest touches. We know that they have designed a special monogram to mark their union. This has been embroidered by our own monogram specialist, Alexandra Anderson, however, we do not yet know where it will be implemented.

There will be plenty to catch up on after the big days and lots of pics to show off. We will keep you all posted on the final looks, as well as capturing Budd throughout the event. James’s dad shall be sporting a quirky floral shirt, whilst Darren has plumped for some seersucker in a design with a twist. Even Mr Butcher will be along for the fun, as will the ever-affable Mr Rowley. We look forward to providing updates, viewing the sartorial splendour and of course, cheering James and Nick as they become newly weds and embark on their next, exciting chapter.