Crack the code during Wedding season

In Off the Cuff & Style Guide
by Natalie

Budd Shirtmakers requests the pleasure of your company to Crack The Code; your guide to wedding dress codes so you don't get left befuddled when you receive an invitation this Summer.

Morning wear is the traditional formal daytime dress worn at weddings, garden parties, investitures and race meetings such as Royal Ascot. The name originated in the 19th century when gentlemen would ride their horse in the morning with a single breasted, cutaway jacket, the morning coat, working its way into men’s formal daywear today.

Take a look at our Morning Wear handbook for a more extensive guide. 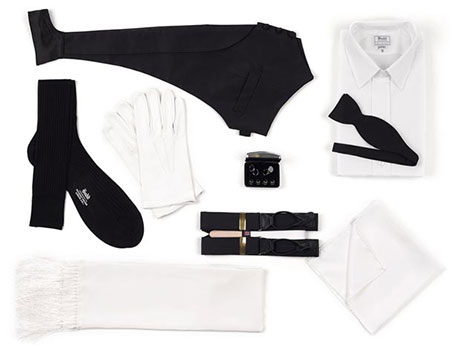 Black tie is becoming increasingly more common instead of the traditional morning dress, especially in the United States. However, traditional etiquette suggests that black tie should not be worn before 6pm so it is more likely for you to be requested to wear black tie in the evening, although for a Jewish wedding black tie is stipulated.

What you need: A black dinner suit or ‘Tuxedo’ as it is known in The States, a white or cream dress shirt, shirt studs and cufflinks, bow tie, pocket square, cummerbund, waistcoat, braces, black three quarter length silk socks accompanied with a simple pump or plain oxford shoe.

Take a look at our Black Tie handbook for a more extensive guide. 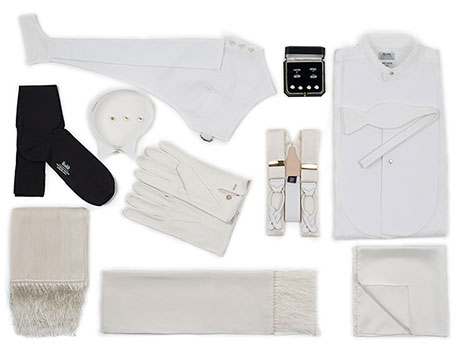 White tie is the original formal dress code and is regarded as the highest level of elegance. It is traditionally worn with a stiff, starched linen shirt and a clean, white, stiff and starched collar to keep up with appearances. The modern detachable collar dates its origins to the late 1820s. It is said that an American woman, tired of continuously washing her husband’s full shirt, cut the collar off and the detachable collar was born. This enabled the shirt to be reused, whilst easing the lady’s task of revitalising the collar. White tie in it’s original form began to fade around 1928 when Edward VIII, Prince of Wales at the time, attended a dinner in a short evening jacket, from then on the formal necessity and popularity of white tie and tails faded somewhat.

Take a look at our White Tie handbook for a more extensive guide.

A lounge suit is the least formal out of the above codes consisting of a jacket and trousers, this may also include a wasitcoat, made from the same cloth. It originated in British country wear and made its way into the most popular style of suit in the Western world especially during the late 19th century in the search for a more comfortable suit.

What you need: A jacket, trousers, waistcoat (all preferably from the same cloth), a crisp shirt in a colour of your choice, tie, pocket square, three quarter hose socks.